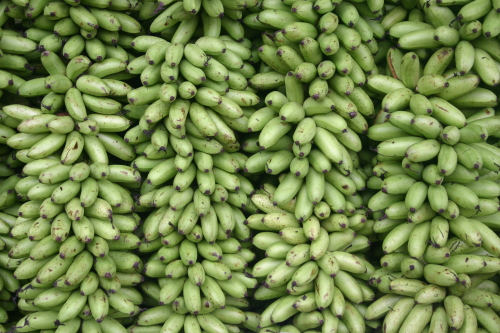 Large stalks of bananas in the market.

Thais use almost every part of the banana tree in addition to the fruits. The leaves can be used as a serving plate, food wrapping, roofing material, ceremonial lanterns and even as a floor polisher. You can find banana leaves on sale in the fresh markets around Chiang Mai, folded up like freshly laundered bed sheets. The soft pith at the center of the trunk is often used to feed pigs, while the outer layers can be used to make string. Banana flowers often appear in salads as well as some stir-fries. But of course it is the plentiful fruit that everyone loves the world over.

Given its many uses, it will come as no surprise that the banana plays an important role in Thai culture as well. You will see bananas as offerings on the alters at homes and businesses, and even at weddings. Because the banana tree grows in any kind of soil, and then bears several suckers that multiply, it signifies abundant food, a long and prosperous life, and a big, united family.

Large, fairly sweet bananas similar to the type found in western supermarkets are called gluay hawm, or “fragrant banana” in Thai. These are typically used to make banana bread and other sweet cakes, as well as eaten raw. More common are smaller firm fruited varieties, the most abundant of which is called gluay nam wah, which doesn’t appear to have any meaning in English. These bananas are generally less sweet and the flesh can be quite firm. The various ways that these “baby bananas” can be prepared seems almost endless. Grilled “barbecued bananas” are quite a common sight on the streets of Chiang Mai, as they are all over Thailand. The fruits are simply peeled and roasted over hot coals.