Although coconut milk is used as a base for many Thai curries, it’s in desserts and sweets that the flavour of coconut really comes through. Coconuts are found in the tropics throughout the world. Some believe that the trees found their own way around the globe, by floating across the seas from one land to another, while others think that early seafarers took the versatile coconuts with them to eat and trade. Although the big commercial coconut plantations are in the southern part of Thailand, the trees are grown all over the country, including Chiang Mai. You will see whole coconuts on sale in most markets, especially the Muang Mai wholesale market, where you will likely see two kinds of whole coconuts in the markets of Chiang Mai. “Young” or “green” coconuts (maprao awn) still have a thick light green husk, making them about the size of a football. The husk is sometimes partially cut away to form a flat bottom, flared sides and conical top. You will often find these for sale chilled at road-side stalls and tourist sights. On purchase, the vendor will hack off the top of the cone and insert a straw for you drink the brackish water inside. You can also use a sharp edged spoon to scrape off the coconut meat from the inside of the shell. The meat of green coconuts is usually rather thin and a bit slimy. The flesh of young coconuts is used in some desserts that call for fresh coconut, where it’s tender nature is quite appropriate. 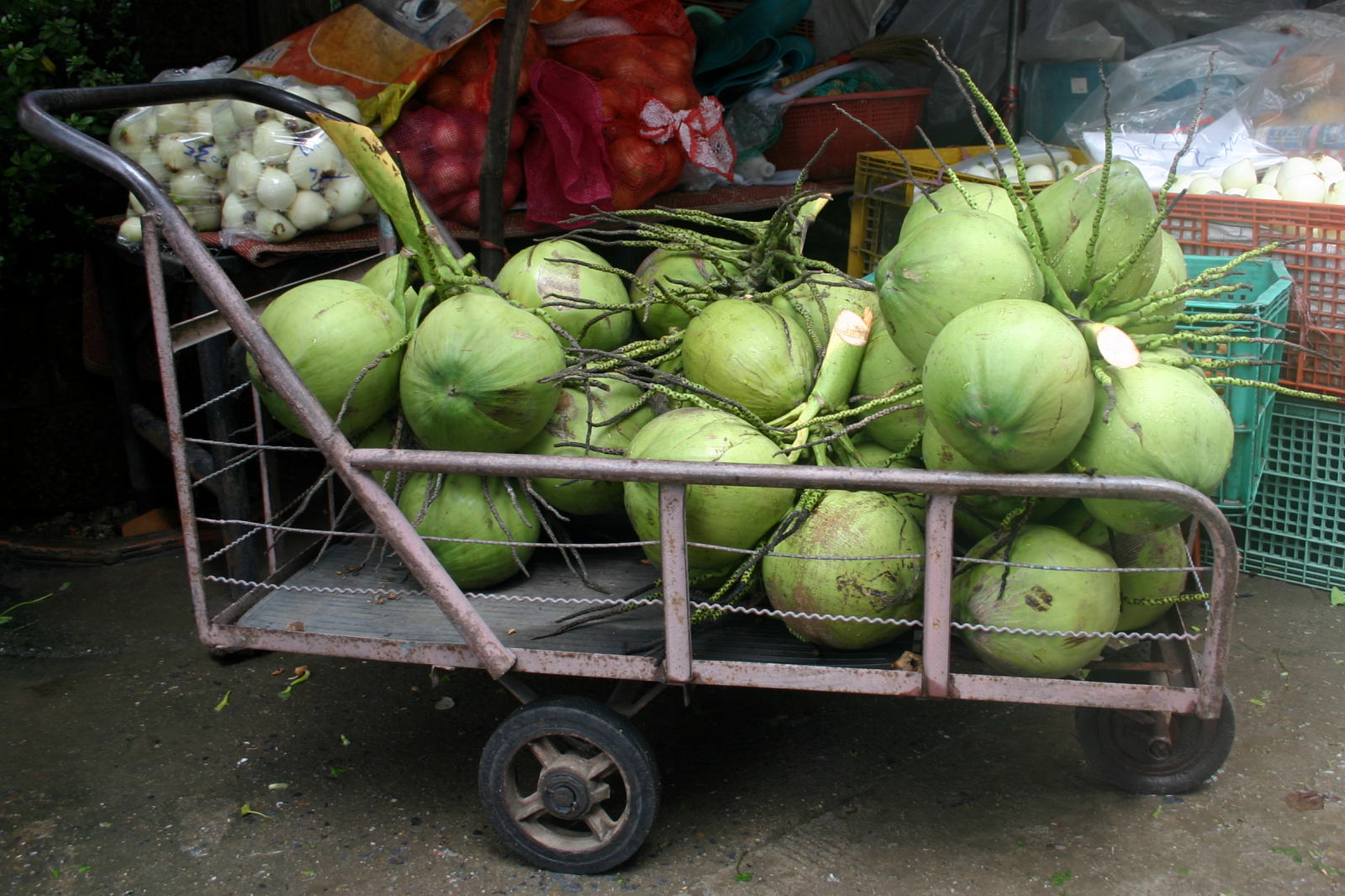 A cartload of coconuts in a Chiang Mai market

To get more coconut meat, the nuts must be allowed to mature. Older coconuts are usually sold in the market with their husks removed. This makes it easier for customers to select the “best” nuts. Coconuts with a lot of meat will be heavier than those with less, and if you shake it, you won’t hear any water sloshing around. Sometimes the last splinters of the husks are burned off, giving the shells a few scorch marks.

The most common use of the coconut is to make coconut milk (ga-tee), used in many curries as well as desserts. Coconut milk is not, as some people think, the watery contents at the centre of the shell. It doesn’t actually contain any milk either. Coconut milk is made by combining the grated meat of mature coconuts with some warm water and then squeezing the mixture through a fine cloth to produce a milky substance. Many of the original recipes I translated for this site started with instructions on how much grated coconut and water to use to produce a given amount of coconut milk needed for the recipe. However, even in Thailand, few cooks today go to those lengths to get coconut milk. They just go to the local supermarket, where plastic bladders of coconut milk are handily available in the dairy case. You will most likely find canned coconut milk in your local Asian market, if not the corner supermarket. Most Thai cooks don’t seem to like the canned milk, but it should work.

An old coconut grater in a Chiang Mai market

There are some cooks that still insist using fresh coconut milk. Normally they won’t buy whole coconuts, but will go to a market where the vendors will grind the meat and extract the milk on the spot. You can find several of these stalls in Chiang Mai at the Sanpakoi market near the train station. The process of making coconut milk at these stalls involves two machines. First, the thick chunks of coconut meat are finely grated by one machine. The grated coconut is then mixed with water and allowed to soak a few minutes, then it is poured into the second machine, which is a sort of cylindrical screw press that squeezes the mixture to extract the coconut milk. The milk exits through the bottom of the cylinder, usually into a bucket, while the expended grated coconut comes out of the opposite end from where the mixture was poured in. Stall owners will often repeat the squeezing process again, then pour the extracted coconut milk into a large plastic bag to give to the customer.