The same stalls which sell galangal usually also carry lemongrass which is called ta-krai in Thai, and also citronella in English. The two end up together in a number of recipes. At the wholesale market, you will see large bundles of lemongrass on sale, bound together with string or strips of dried banana tree bark. The stall owners will sell the bundles whole for less than a dollar. You may also spot smaller bundles with just a few stalks of lemongrass bound together with a few slices of galangal and some kaffir lime leaves. 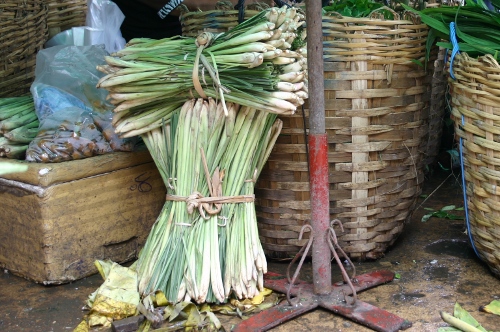 Lemongrass on sale in the wholesale market

The English name for this herb comes easily from the lemony aroma it gives off, especially when cooked. Along with fresh lime juice, it is the key ingredient in the ever-popular Tom Yum soup, as well as with many other Thai dishes. The oil that gives the plant its aroma is supposed to be a good cure for upset stomach and indigestion. Lemongrass juice, or tea, is a popular herbal drink in Thai traditional medicine. The tea also makes for a natural insect repellent that can be used to water house plants to discourage bugs. Since only the white bulbous base of the stalk is used in cooking, the tea is an excellent way to make use of the rest of the lemongrass stalks.

Lemongrass is native to southern India and Sri Lanka. It was most likely bought to Thailand by Indian and Sri Lankan traders, who settled in southern Thailand and helped to found the ancient city of Ligor (modern-day Nakorn Si Thammarat), capital of the kingdom of Lankasuka, around the second century. Around the 13th century, the Theravada form of Buddhism, now practiced by more than 90 percent of the Thai people, entered Thailand from Sri Lanka through Ligor. From here it spread to Sukhothai and Chiang Mai.