According to some sources, the people occupying the broad flat plains of what is now Thailand may well have been the first Asians to cultivate rice, if not the first in the world. Archaeological evidence unearthed in Thailand’s north-eastern plateau definitively dates rice cultivation back to 4000 B.C. Recently, in the Pai district of Mae Hong Son province high in the mountains west of Chiang Mai, evidence of rice was discovered that was about 6,000 years old. It may in fact go back as far as 10,000 years ago. Rice became so important to the people and culture of the north that the northern kingdom of which Chiang Mai was once the capital was called Lan-na Thai, literally “one million Thai rice fields.”

In the 1904 book The Kingdom of Siam, prepared for Thailand’s grand pavilion at the Louisiana Purchase Exposition held in St. Louis, U.S.A., a former assistant to the Minister of Agriculture, W.A. Graham, Esq. wrote:

“The Siamese are, before all things, an agricultural nation. From time immemorial, the valley of the [Chaophraya] has been one vast rice-field, and the present inhabitants of the country continue to plow, sow, and reap in it after the same methods, and with the same kind of implements, as were employed by their predecessors a thousand years ago.”

With such a long history, it’s no surprise that rice has become deeply ingrained (if you’ll pardon the expression) in Thai life. Entire books can, and have, been written about the importance of rice in Thailand. Rice is associated with times of plenty, it’s given as offerings to monks and at temples, and it has woven its way into every day language. A well-off person or village may be described as having “leftover rice”, while the early infatuation stage of a relationship is sometimes compared to “young rice.” It may then come as no surprise that the common phrase for having a meal translates to “eat rice.” 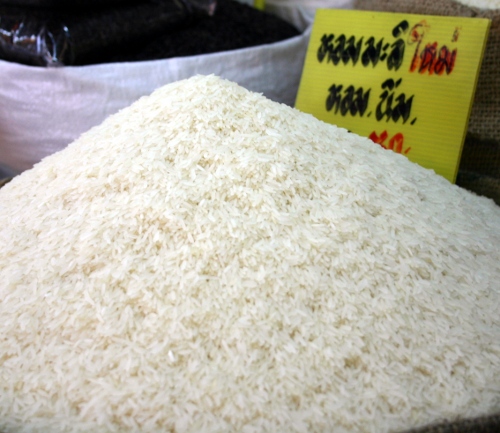 Fragrant Jasmine rice on sale in a fresh market.

The rice eaten by Thais is mostly the long grained “Jasmine” strain, named for its flowery fragrance when cooked. In recent years, Thai Jasmine rice has become so coveted that Thailand had to go to court in the United States to block attempts to patent the strain by an American company. Cooked rice is usually simply referred to as khao suay, which literally translates to “beautiful rice.” Thais will normally rinse rice before cooking it. Traditionally, the rice is rinsed three times in a row before being placed in a pot for cooking. The amount of water added for cooking is quite important, and varies slightly with the exact quality of rice used. A good rule of thumb for the higher grades of rice purchased in stores is to use two cups of water for every cup of rice. Rice is cooked until all the water is absorbed, which should be around 20 minutes. The rice should be allowed to ‘rest’ covered at least a few minutes before serving. 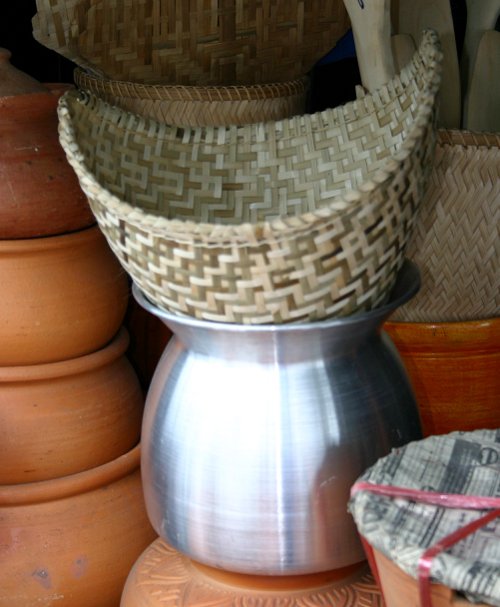 One of the reasons for sticky rice becoming less common may be its more complex preparation. First, the rice must be soaked overnight in cold water, then rinsed thoroughly. The rice is then steamed by placing it in a conical bamboo basket that fits snugly onto a purpose-made pot. You can cook sticky rice in a regular steamer, after lining it with cheesecloth to make sure the rice does not fall into the water.

Rice was traditionally planted in May, after the rainy season has begun in earnest. Farmers would usually plant some fast growing rice, to replenish dwindling stocks from the previous planting season, as well as slower growing varieties that will mature later but provide a greater amount of rice per plant.

In days gone by, as many as 100 different rice strains were grown in the Chiang Mai valley, but in recent years this has shrunk to less than 20 as high yield strains have gained wide acceptance. The rice is started out in seed beds, but then transplanted to the rice fields after 30 to 50 centimeters of water has accumulated in the paddy. Once the backbreaking work of preparing the fields and transplanting the young plants is completed, relatively little work is required until the rice is ready to be harvested. The flooded fields don’t require any weeding.

On the street, you’ll find rice at the curry stalls of course, but you’ll also find a couple of “specialty” stalls selling some specific rice dishes that are favored by Thais. You’ll also find places where you can order rice stir-fried to order.