When visiting a Thai products festival in the parking lot of a local shopping centre, I happened on a booth selling deep fried insects. This isn’t the kind of thing you find on the street every day, although in Bangkok they’re pretty easy to find. They normally appear at temple fairs or other festivals, and then move on. 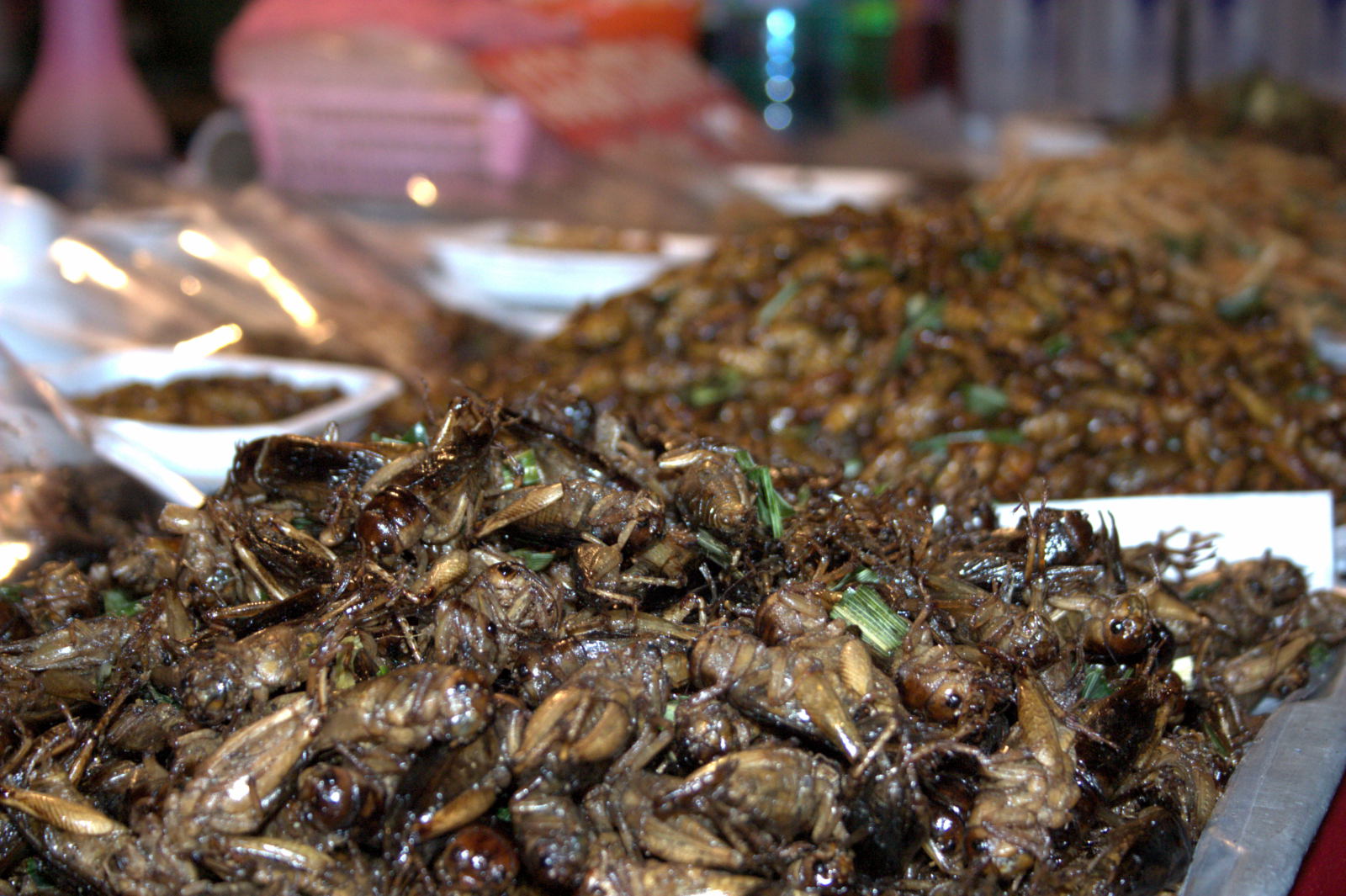 Creepy crawlies on sale in a bug buffet

This stall was run by a lady named Lek along with her husband, who took care of the cooking while Lek handled the sales. Lek was a bit shy about talking to me. Whether it was because I was a foreigner or due to some embarrassment about her wares, I wasn’t sure. I asked her if sales were good. “Just satisfactory,” was all she answered.

The trays arrayed in a sort of “bug buffet” on the table were filled with insects of every kind, from larvae similar to silk worms, to water beetles, grasshoppers and even something that looks a lot like roaches. All are deep fried, with the addition of little seasoning other than basil.

The customers are mostly country folk looking for a taste of home. If you really want to be sure of finding such ‘delicacies’, your best bet is to look in the North-eastern region of Thailand, which the Thais call Isan. This is where the practice of eating certain bugs can still easily be spotted.

It was in fact in Isan that I first encountered the scene myself about 25 years ago. It was only my third trip to Thailand, well before I came to live and work in Bangkok. A Thai friend I had made on a previous trip had invited me to his home town in Loei province, very near the Laotian border. Even though it’s a very long way from Bangkok, we ended up having to make the journey by bus, which is very time consuming but it certainly does give you an unparalleled glimpse of life away from the cities and tourist spots.

The bus made a stop in Chaiyapoom, in the very heart of the north-east, to let some passengers off and take on new ones. As at other stops along our route, vendors came up along both sides of the bus to sell the local specialities, in case any of the passengers were hungry. The first item that caught my eye was what could only be described as “eggs on a stick.” Three to four duck eggs were carefully threaded onto a bamboo stick and then barbecued over hot coals. It seemed like a very complicated way to cook eggs, but I suppose eggs cooked this way make an easy snack for travellers.

I didn’t get much time to ponder the strange site of barbecued eggs, since the next vendor to come along had a bamboo tray full of giant moths. They appeared to be dead, but didn’t look cooked at all. I turned a questioning gaze towards my friend. “Do you want some?” he asked.

“They’re for eating?” I still wasn’t sure.