A large variety of Thai sweets employ the use of a small box crafted from leaves, called Khanom Kratong. These boxes are usually about 1½ to 2 inches square, and around ½ inch deep. They are typically crafted from the pandan leaf by cutting a length of these long leaves and folding the sides up to form a box. Traditionally, a small splinter of bamboo would be used to fix the sides of the box together, but these days you’re more likely to encounter metal staples. 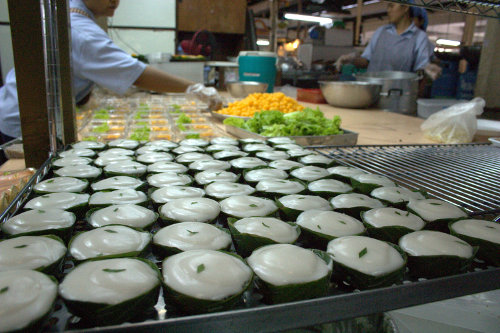 Leaf box sweets on sale at a market stall.

The boxes may be filled with almost anything. Sweet sticky rice with various flavorings and toppings is common, as are variations on the double-decker sweets described here. These last sweets may have a bottom layer of tapioca pearls or a sort of gelatin. Either one will be topped with a sweet coconut milk pudding. With an opaque top layer, you can never be quite sure what you’ll find when you dip your spoon into these desserts for the first time, but I’ve never been disappointed.

In Thai, these boxes are called kratong. They are the simplest representation of a traditional craft that reaches its zenith during the annual festival of Loy Kratong. Taking place on the full moon night of the 12th lunar month (usually sometime in November), the event pays homage to the goddess of the waters, Mae Khongkha, at the end of the rainy season when the rivers and rice paddies are flooded. Similar events based on old Hindu traditions are held in other Asian countries.

In Thailand, on Loy Kratong night, people will visit local waterways where they float elaborately constructed kratongs filled with flowers, lit candles and a few coins. In Chiang Mai, the Ping River, as well as the city moat, is all aglow with these tiny offerings to the goddess. There’s an interesting story about the origin of the practice. Although it’s probably a legend invented for tourists, it’s still an interesting tale.

According to this legend, the tradition started in ancient Sukhothai, a kingdom south of Chiang Mai that existed at about the same time and is considered by many Thais as the birth place of the Thai nation. In old Sukhothai, there was a princess who was very much in love with her prince. To demonstrate her love, she constructed a beautiful kratong of folded banana leaves, filled it with flowers and some candles. On the night of Loy Kratong, as her lover was relaxing beside one of the many canals that criss-crossed the ancient capital, she set the kratong afloat on the canal, where it floated past her prince, pleasing him greatly.

From this legend comes the tradition that if you set a kratong adrift with your loved one on Loy Kratong night, and it stays afloat until out of sight, then your love will last forever. This tradition makes Loy Kratong something of a St. Valentine’s day for Thais, although they also celebrate that western holiday in February as well. In Thailand, no excuse for a party is ever missed!