Tapioca, or cassava as the plant is more properly known, apparently originated in South America, but it is now an important agricultural crop for many countries around the world, including Thailand, where the fresh roots are known as mun tet and the processed ‘pearls’ used in desserts are called sagoo. The plant itself is rather unprepossessing in looks. It’s the large tuberous roots, looking something like an oversize yam, that are the cash crop. 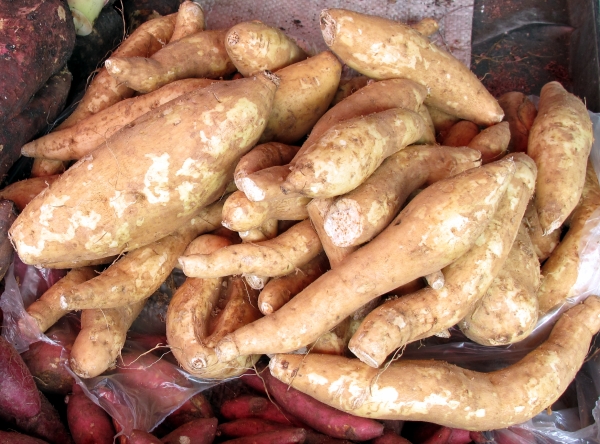 In Thailand, most of the cassava is grown in the central region as well as the hot dry plateau of the north-east, where the crop’s modest water requirements make it a good dry season crop. When mature, the roots are collected, dried in the sun, and then usually ground into a powder. Although it has some industrial uses, for which there is a huge export market, this tapioca flour also shows up in many recipes, where it is mostly used as a thickening agent. For this purpose, an equal amount of corn flour can easily be substituted for tapioca flour in any recipe.

What is unusual about tapioca in Thailand is the practice of forming the flour into small spheres, that can be purchased in just about any supermarket. When boiled or steamed, these balls will expand slightly and become almost transparent. Sometimes you can find these ‘pearls’ with a black sesame seed in the centre, making the cooked tapioca look like frogs eggs.

The flour or pearls are used in many Thai desserts. The flour is used not only as a thickening agent, but is also used to coat fruits, seeds or other things, which are then placed into boiling water. As with the pearls, the flour coating will expand a little and become translucent, giving a jewel-like quality to whatever was used as a base. While you can make many of these desserts at home, street stalls will often purchase the dried main ingredients at a wholesale market, then just boil them in water and serve with ice, syrup or whatever is called for.