Even in the “Land of a Million Rice Fields” (Lanna as the area around Chiang Mai was once known), noodles play an big part in the Thai diet, and especially in the foods found on the street. While a great deal of national pride is invested in the country’s prised Jasmine rice, Thais' feelings about noodles are more personal and emotional. Noodles, more than rice, are a “comfort food” for Thais, especially when traveling away from home. When I accompanied a Thai trade delegation to the Middle East in early 2004, the travel agent’s information packet for my fellow Thai delegates was careful to inform them that import restrictions in the countries we were visiting did allow them to bring “Mama” noodles with them. “Mama” is a brand of seasoned dried egg noodles (ba mee) whose name has become synonymous with the product. 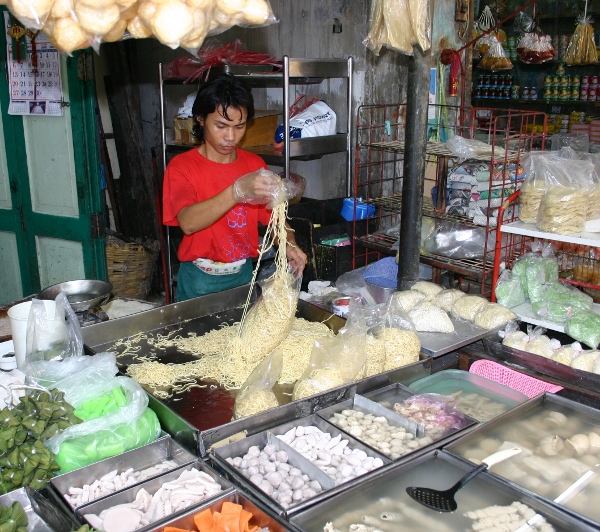 A noodle stall in a Chiang Mai market

Noodles are the preferred lunch for many, if not most, working Thais, which is why you will see many stalls selling noodles around mid-day. The most common type of noodle is kwiteeo, pasty white strips made with just rice flour and water. Rice noodles (kwiteeo) are usually made fresh daily. The dough is rolled into a thin flat sheet. A stack of 10 to 12 sheets will be rolled together and wrapped in waxed butcher’s paper. You will spot these rolls on sale in some of the local fresh markets, such as the Chang Puak (White Elephant) market just outside the northern gate to the old city of Chiang Mai. Customers may purchase the rolls of sheets whole to make a sort of spring roll, but mostly they will want to make noodles. For this, the vendors will unwrap the roll and slice it to make noodles and inch or more wide. The vendor will then appear to ‘massage’ the noodles to help break them apart before scooping them into a plastic bag for the customer. Rice noodles are also manufactured in narrower strips such as sen lek, which resembles fettuccine, and the spaghetti sized sen mee. Kwiteeo may be served in soups, stir-fried, or with thick gravy-like toppings. In Thai, kwiteeo is also used as the generic word for all noodles.

When the same rice flour mixture used to make kwiteeo is forced through a large-holed sieve directly into boiling water, the result is a thick spaghetti called khanom jeen, which literally means “Chinese pastry.” Khanom Jeen is rather rare on the street elsewhere in Thailand, but is more common in the north. Khanom Jeen is usually served as coils of the noodles, looking something like a bird’s nest, topped with a curry such as Green Chicken Curry (gaeng keeo wahn). In the north, you will also commonly find it topped with a spicy gravy-like sauce called nam ngeeo.

Looking a lot like spaghetti, ba mee is made with wheat flour and sometimes eggs, both of which give these noodles their traditional yellowish color. Ba mee is mainly used in soups although you’ll sometimes find it deep-fried and stir-fried. A thin flat form of ba mee is a specialty of Chiang Mai and is the basic ingredient in Chiang Mai’s most famous noodle dish, a hearty thick soup called khao soy. If you can’t find this kind of ba mee, you can try linguine instead.

Glass Noodles (woon sen) are made from the starch of the mung bean and water. Their almost clear quality gives them their name. Unlike other types of noodles, Glass Noodles rarely make an appearance in the types of noodle dishes eaten for lunch. They’re more commonly found in hot and spicy salads, stir-fried or as fillers for clear soups (gaeng jood).

Although fresh noodles are almost universally used for most dishes, dried versions of most types are readily available. Dried noodles usually do not need to be boiled like Italian pasta. Rather, they just need to be soaked in warm water for about 10 minutes.

Noodles are generally served from a cart or open fronted shop house. Although theoretically mobile, most noodle cart owners will stay in one spot, at least as long as there is a steady stream of customers. Noodle carts are perhaps the best example of a strange form of snobbishness that Thais have about food. Full service restaurants will sometimes have noodles on the menu, but Thais will almost never order them. Good noodles, it seems, can only be obtained on the street; and while there may be a noodle cart on almost every corner, Thais will not think anything of driving to the other side of town to get to a cart with a good reputation.

While they may be snobbish about where they buy their noodles, the noodle cart is a remarkably egalitarian place. At a typical stall, high powered businessmen who drove their BMW or Lexus across town will mix with local construction workers. Regardless of how they got there, customers will all pay the same low price for their meal. The typical bowl of noodles will cost around under a dollar.

Noodle carts will generally specialize in a particular type of noodle and style of preparation. There are seemingly hundreds of different ways to prepare noodles. Starting with the meat, which could be chicken, pork, duck, fish balls, or any of a number of other meats, the variations go on to the stock and seasoning used for the soup. As a result, it often seems as though no two stalls have exactly the same thing.

Although there’s some dispute about whether or not Italian pastas are really descended from Chinese noodles, there’s no doubt that Thai noodles are directly related to their Chinese ancestors. Even the Thai words for the various kinds of noodles are more or less the same as their Chinese counterparts. This is largely true throughout South-east Asia, where mee means wheat and egg noodles in Thai, Malay, Indonesian and even Vietnamese.