The spicy minced meat salad known as larb is found in many different styles all over Thailand. Variations abound, as the dish can be prepared with just about any kind of meat, including duck, chicken, catfish, prawn, beef, and on and on. Sometimes referred to as Thailand's own version of steak tartar, the meat is almost always served cooked, although there are some regional variations that serve it almost raw. Unlike most contemporary Thai dishes, larb was traditionally made some hours in advance of when it would be consumed. The food would be prepared in the morning for farmers to consume out in the fields for their mid-day meal. 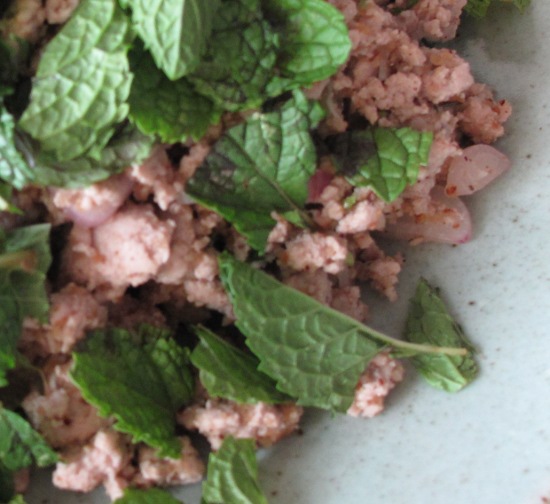 Larb is generally classified as a salad by western standards, mainly because it is almost always served at room temperature and with fresh vegetables like cabbage or long beans. This point makes it a good dish for a diner party, since it can be prepared in advance and simply set aside while you make other dishes that need to be served hot.

This version of larb is really the northern-eastern ("Isan") variation on the traditional recipe. It's perhaps the most liked of all the regional variations, and is the most palpable to Western tastes. One of the key ingredients of Isan style larbs is roasted rice, which is used as a sort of binder. To make it, dry-roast uncooked rice in a pan until it begins to brown, then grind it in a mortar and pestle.